One of the most treasured organs from regeneratively raised, grass-fed, grass-finished New Zealand cattle in one amazingly powerful supplement

Made with the Highest standards

It is well-known that our ancestors cherished fat as a vital source of nutrients and energy to achieve optimal performance...

Well-known paleoanthropologist and PhD, Miki Ben-Dor, explored various traditional cultures and emphasized fat being a vital source of fuel as well as a health promoter. “In line with evidence for the importance of dietary animal fat in prehistoric and traditional societies, the studied traditional societies perceived animal fat as a vital component of their diet and a profound source of health rather than an impediment to health as it is presented in many dietary recommendations today.” Miki Ben-Dor, Tel Aviv University.

Weston A. Price was a Canadian dentist who dedicated his life to the study of various cultures found throughout the world and the relationship between nutrition, dental and physical health. In his book Nutrition and Physical Degeneration, he noted that tribes free of disease and in robust health had a great deal of animal products and organ meats and fat in their diet. Of the Indians of northern Canada, “An essential characteristic of the successful dietary programs of primitive races has been found to relate to a liberal source of fat-soluble vitamins… Fat-soluble vitamins are found most abundantly in the fat of animals and in their organs.”

“There is a direct correlation between brain size and nutrition needs… Humans required high quality, dense nutrition such as animal fat to develop and maintain their large brains and bodies.” Dr. Bill Schneider, KetoCon Online 2020

“Eskimos eat liberally of animal fats from fish and marine animals. On their native diet they are free of disease and are exceptionally hardy.” Sally Fallon, Nourishing Fats

“Heavy reliance on animal sourced foods, including animal fat, was critical to the evolution of our brains.” Eat Meat. Not Too Little. Mostly Fat., The Facultative Carnivore, L. Amber O’Hearn

“The marrow was full of fat and was usually eaten raw. The Indians knew how to strike the femur bone so that it would split open and reveal the delicate interior flesh…. Sometimes the Indians selected only the fatty parts of the animal, throwing the rest away…. All of the foods considered important for reproduction and all of the foods considered sacred were animal foods, rich in fat.” Sally Fallon, Gut And Grease.

“Particularly for the hunting class of Masai males… it was a cultural practice that they avoided all vegetable food. They prided themselves in never eating anything but blood meat and fat. Based on the descriptions of Orr and Gilks, they were eating...About 30% protein and 65% fat.” Steve Phinney, Pemmican and Indigenous Diets 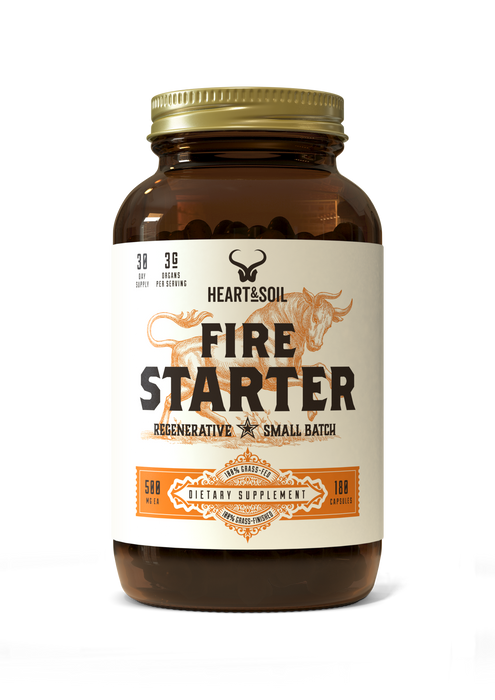 It was the only thing I changed in my diet that week and I was painfully bound up right away. It’s been about 2-3 weeks and I’m starting to get more regular...ish. Each day I feel better and better with a little extra energy boost for the entire day. I feel pretty dull if I forget to take it. Even though I wasn’t sure about it at first, I believe it’s a great supplement for people starting on the carnivore journey.

Firestarter has fixed my tummy. I have had no gut issues since I started taking these. Absolutely love it!

My husband and I both use these products and love them all!

Awesome love this product great way to get some good extra fat in my diet, super easy and convenient. I actually feel theres a fire in my body burning extra fat Love you Paul and keep doing what doing.

Love everything about heart and soil thank you!!