Heart of the Warrior

Introducing: Heart of the Warrior

Nutrients in Heart of the Warrior

Both liver and heart have been prized by indigenous groups, who often regard them as sacred foods, and prioritize their consumption.

In The Fat of the Land, arctic explorer Viljalmur Stefansson states of the Inuit, “While meat of any kind is in great demand, it is interesting to note that the liver of any animal is a favorite.”

From Seal Blood, Inuit Blood, and Diet, medical and nutritional anthropologist Dr. Kirsten Borre emphasized consumption of liver was particularly treasured for those who were ill within the tribe across many cultures,

“The eating behavior of sick people may be exemplified by the case of a 30- year-old woman who complained of headache and depression… She told me she was feeling tired, nauseated, and irritable. She had lost her energy and felt weak and cold… The meat she received included a piece of liver and part of the backbone and hips. The woman ate the liver at once, sharing a bite with her five-year-old child, and cooked the rest as soup which was shared with her family and me. Later that night the woman was smiling and told me she was feeling much better.” - Dr. Kirsten Borre from Medical Anthropology Quarterly, October 2009.

Weston A. Price added to the notion that liver is truly a prized food for indigenous people. Regarding an African tribe, known as the Nuer, he stated, “I learned that they have a belief which to them is their religion, namely, that every man and woman has a soul which resides in the liver and that a man's character and physical growth depend upon how well he feeds that soul by eating the livers of animals. The liver is so sacred that it may not be touched by human hands.”

Beverly Hungry Wolf describes myriad options on how to prepare these organs in her book, The Ways of My Grandmothers, “All the insides, such as heart, kidneys and liver, were prepared and eaten, roasted or baked or laid out in the sun to dry. The lungs were not cooked”

Historical literature highlights indigenous cultures and their eagerness to include organs. In The Diet of the Mountain Men, William E. Holston noted that when game was plentiful only a few choice parts were taken,

"The tongue was removed by ripping open the skin of the lower jawbone and pulling it out through the oriface The heart and liver were added to the fare. A favorite appetizer was marrow from the leg bones. The bones were cracked and the marrow (about one pound to a bone) was extracted. Blood often was drained from the body cavity and saved..." 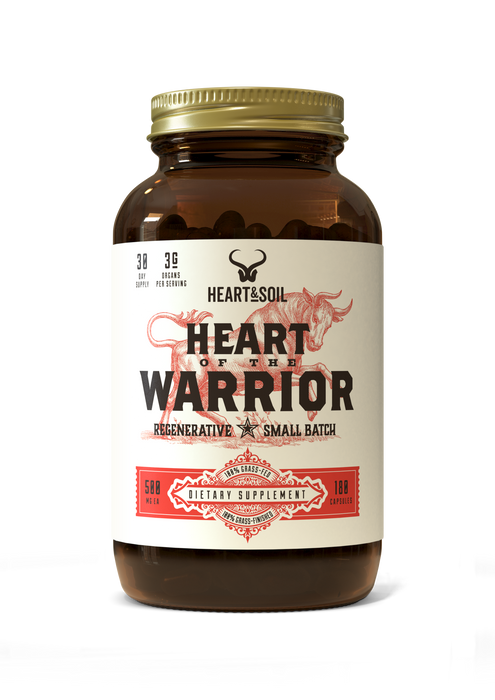 Started these a couple of weeks ago with the animal based diet and could tell immediately that they were having a positive effect on me. More energy, much less hungry, and better sleep, This will be a regular purchase for me.

The jury is still out, I felt an immediate impact to my energy level. I take a regimen of vitamins but felt like something was missing, I have found the answer. Should you take all 6 capsules at one time? I am taking 3 in the a.m. & 3 after lunch.

Hey Jim, Great question! Though the capsules we provide are considered a "supplement," they are real food and can be taken on an empty stomach or with a meal. If you are not already consuming fresh organs (which we always suggest first), we suggest a dose of six capsules of each supplement per day. This is a starting point, and the amount can be doubled or even tripled for added support.  We generally suggest taking these in the morning, and if you wanted to split up the dose, do morning and afternoon. Often customers notice an increase in energy after taking them, so we do not suggest taking them in the evening or before bed! Our general suggestion for fresh organ consumption is one to three ounces of fresh liver and other organs (like spleen, thymus, kidney, etc.) per day. To get this amount from our supplements, you would want to take between six and twelve capsules of each product per day, but there is absolutely no harm in exceeding this. Bonus points if you wash it down with some bone broth for a glycine bump! If you know that you are sensitive to dietary changes or supplements, you may want to start with a lower dose and increase it gradually. In this case, we would suggest starting with one to two capsules per day and increasing by one capsule every two to three days until you reach six capsules per day. Some people need to increase the dose more slowly than this. We suggest a more conservative approach for those individuals, which might consist of starting with one per day and increasing by one capsule per week. It can take some time to get to six capsules per day, but the benefits are enormous once they get there. Please let us know if you have any additional questions. Stay Radical! Heart & Soil

Heart of the Warrior is an amazing real food supplement that has helped me improve my health and performance by giving me the nutrients I was missing from my everyday diet! Can’t recommend it enough!

Heart of the warrior!!

I’m all in with every single product heart and soil offers love it!

Firestarter got my fire started!

My Energy is back! Thank You!!!