Strengthen your defenses. Targeted support for the immune system, histamine intolerance, and allergies.

100% Grass Fed Thymus, Lung, and Spleen are abundant sources of bioactive peptides and nutrients that enhance immune cell functioning and response to pathogens, as well as energy, mitochondrial function and exercise performance.

The consumption of these immune fighting organs were treasured by our predecessors. According to Beverly Hungry Wolf in her book The Ways of My Grandmothers, she explained that “the lungs were not cooked, just sliced and hung up to dry.”

Samuel Hearne, explorer and writer, journaled his experience with the Indians northwest of the hudson bay in 1768 and described a treasured dish,

“but of all the dishes cooked by those people, a beeatee, as it is called in their language, is certainly the most delicious, at least for a change, that can be prepared from a deer only, without any other ingredient. It is a kind of haggis, made with the blood, a good quantity of fat shred small, some of the tenderest of the flesh, together with the heart and lungs cut, or more commonly torn into small shivers; all which is put into the stomach, and roasted, by being suspended before the fire by a string.”

Consumption of liver was also particularly emphasized for those who were ill within the tribe across many cultures,

In The Fat of the Land, Vilhjalmur Stefansson, a famous anthropologist and expert behind the diet of the Inuit, states that, “While meat of any kind is in great demand, it is interesting to note that the following are favorite cuts…  The liver of any animal…” He additionally noted that the heart and kidneys were especially cherished by the Mackenzie River Eskimo’s and further reported, “The kidneys are usually given to the children, somewhat as if they were candy.” Throughout his travels he noted the importance of eating the whole animal and highlighted the value these foods brought to the vitality and happiness to these thriving cultures of the Northern Arctic circle.

Weston A. Price also added to the notion that liver is truly a prized food for indigenous people in his book, Nutrition and Physical Degeneration. Regarding an African tribe, known as the Nuer, he stated,

Could be a great product

I eat liver so i dont need it in yet another desiccated organ product. Not sure about the value of lung. The product is also quite expensive. A reasonably priced spleen/thymus/kidney product would be brilliant. With Histamine & Immune I did maybe have some improvement in nasal congestion that plagues me at night. But not sure i can justify re-ordering given the cost. 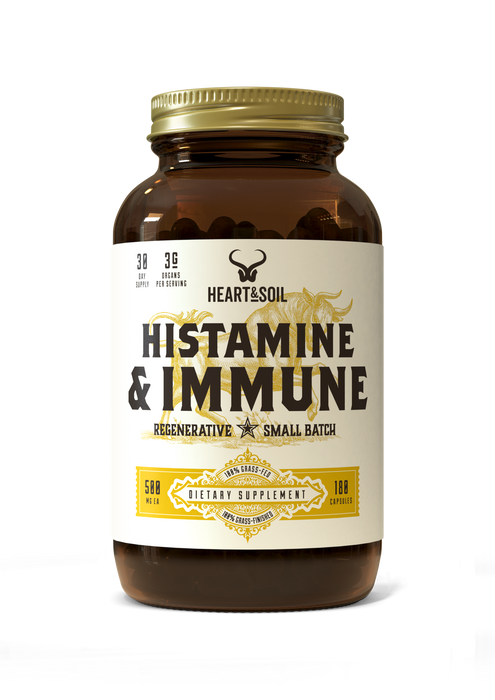 Have numerous food "sensitivities", mold allergy, 71y.o. have been sugar and grain-free for a long time...recently lowering oxalates, and linoleic acid.. since adding HISTAMINE & IMMUNE the sinus issues have let up...but the IBS continues some...just have to keep at it...also, had a slight tremor...that's better...but it seems the linoleic acid aggravates that.

I have thyroid issues (had a golf-ball sized nodule removed in 2015), and get my labs done regularly to check my dosage. It had been years since my results had fallen in the "normal" range - until I started taking the Histamine & Immune supplement and converted to a meat-based (not 100% carnivore) diet. With an additional slight tweak in my thyroid dose, I have been in the "normal" range for the last 2 sets of labs. Thanks, Dr. Paul - for your fearless promotion of radical health!

For much of my life, I've had a mediocre diet, and I've lacked important vitamins and other nutrients. Recently, I've been working on improving my diet -- taking small steps. In other words, my diet is still mostly not-so-great. Adding in these supplements has, I think, benefited me greatly. Obviously, having a healthy diet to improve gut health is important (and would likely maximize the effectiveness of these capsules), but even if (like me) you are still working on moving from "standard American diet" to something healthier, adding in these supplements is likely beneficial. I can't rule out the placebo effect, but I am convinced that taking these capsules is genuinely giving me more energy and clarity (as one would expect from consuming vitamins/nutrients that one has lacked for a long time). After several weeks using Heart & Soil supplements, I can truly say that I recommend them.

Love all the organs that are included in this bottle. Gives me a much needed energy boost and I am thankful that I can get the benefits of organs without having to taste them! :)