Our predecessors cherished all parts of the animals and would rarely let any go to waste. They instinctively knew that specific organs such as the liver, heart, and kidney contained essential nutrients for optimal health and overall vitality.

In The Fat of the Land, Vilhjalmur Stefansson states, “While meat of any kind is in great demand, it is interesting to note that the following are favorite cuts…  The liver of any animal…” He additionally noted that the heart and kidneys were especially cherished by the Mackenzie River Eskimos, observing, “The kidneys are usually given to the children, somewhat as if they were candy.” Throughout his travels he noted the importance of eating the whole animal and highlighted the value these foods brought to these thriving cultures of the Northern Arctic Circle.

Other scholars of traditional Eskimo cultures have also described the value of specific organ meat such as the liver - noting hunters often would expose the internal organs of a seal after a fresh hunt and eat pieces of the liver raw. Consumption of liver was particularly emphasized for those who were ill within the tribe,

Weston A. Price was a Canadian dentist who dedicated his life to the study of various cultures found throughout the world and the relationship between nutrition, dental and physical health. In his book Nutrition and Physical Degeneration, he noted that tribes free of disease and in robust health had a great deal of animal products and organ meats in their diet. Of  the Eskimo of Alaska, Price noted that while the bulk of their diet consisted of large animal life from the sea, they selected organs and tissues with “great care and wisdom.”  The North American Indians additionally treasured the use of organ meats. Price noted in his travels that these Native Americans valued the different organs and tissues for “providing a defense against certain of the affections of the body which we speak of as degenerative disease.”

Longtrail Snowbird of the Blackfoot tribe also describes the traditional consumption of many different organs from animals,

“Raw morsels of the meat would have been snacked on while the butchering was taking place. You as a participant might have been offered raw liver, kidney, eyes, belly fat, testicles, parts of the stomach, marrow from leg bones…” - Native American Technology and Art. Essays on Native American Life and Relations With Non-Natives 1600-1850 by Longtrail Snowbird

Throughout our history as humans, eating nose to tail has always been part of our ancestral heritage and provided our predecessors with unparalleled nutritional value. 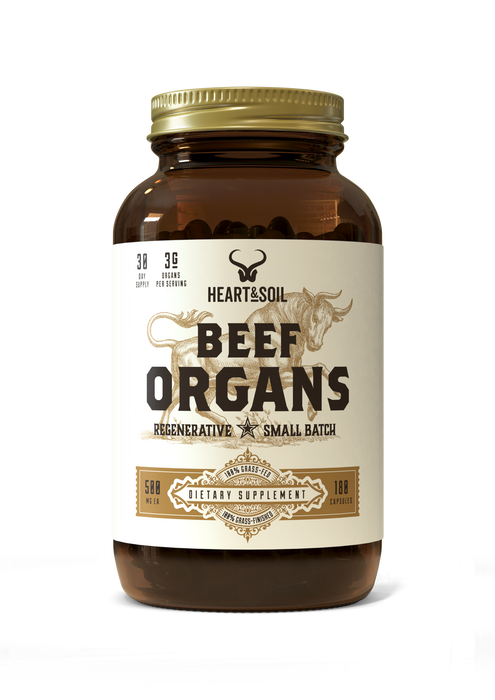 I really felt a change for the better in my digestion and skin! I’m convinced that we need organs but dislike them, so this is a great way to get them.

What a great way to get organs into your diet. Easy, clean, fast. I also like to eat fresh organs though this is an amazing way to make organs a daily staple. Awesome!

I did not grow up eating ***** meats, so do not like most of them. I like getting the nutrients though, and can get them this way without the taste I do not like.

Absolutely amazing! Great supplement from a great Doc! Only thing I would change is the oversized bottle. A bottle half the size would do nicely....remember Reduce, Reuse,Recycle